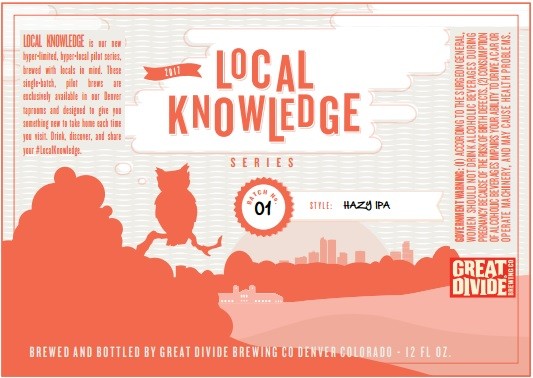 Great Divide Brewing has just introduced Local Knowledge, a special small batch series that will only be available at their two outlets in Denver…and it got us thinking ROAD TRIP!

When Great Divide opened back in 1994, there was no craft beer scene as we know it today. In fact back then there weren’t even any breweries in Denver that didn’t also serve food and as Westword reported owner Brian Dunn had to know that he was taking a HUGE risk.

Flash forward to today and Great Divide is the largest brewery in Denver, now with two taprooms, the production capability to brew 60.000 barrels of beer a year, and plans for a new state-of-the-art brewery, complete with its own artisan restaurant and beer garden.

And the craft beer biz has also grown…

Now over 5000 craft breweries in the US (with over 140 based in Colorado alone) Great Divide finds itself surrounded by neighborhoods full of new breweries, many of them basically tap houses building their reputations selling small-batch one-offs directly to their fans.

Great Divide also has fans who line up for their special small-batch creations, but they’ve never packaged them before until now.

And in keeping with this series’ uber-local spirit, Local Knowledge releases can only be purchased at Great Divide’s original brewery taproom and at their Barrel Bar in Denver.

The brewery recently released the first in this series, a hazy New England-style IPA that locals are still talking about. And that release will be followed an experimental apricot ale sometime this month and a raspberry sour in June. Each Local Knowledge six-pack will also include a bookmark with tips and ideas from locals about fun things to discover in Denver…which is cool.

But the opportunity to take in some of Great Divide’s very special small batch creations, and the ability to take some of them home with you…That’s even cooler.