Even if you’ve been living under a rock, you know that Super Bowl LIII is taking place on Sunday. And this year’s battle, which pits the two-time defending AFC New England Patriots up against the NFC champion Los Angeles Rams in Atlanta, will be viewed by millions at gatherings all across the nation. Launched on January 15th 1967, the Super bowl has become a national event and spawned the Super Bowl party tradition which is right there with New Year’s when it comes to drinking.

And what people primarily drink is beer but that’s evolving, at least with women, according to new Nielson data…

Super Bowl parties are beer and beer first… Tts expected, as traditional as chicken wings and easy to buy in bulk.

But the Super Bowl’s female fan base is growing (47% in 2018) and with that the drinks biz is seeing an increase of wines, spirits and hard seltzer products making their way into what has been traditionally beer dominated game-day gatherings.

In fact Nielson data is showing that the sales of low-calorie flavored malt beverages, or FMB’s as they’re referred to by the drinks industry, have more than tripled from Super Bowl 2016 rising from 0.3% to 1,3% in 2018, which helps explain a new hard seltzer Super Bowl commercial. 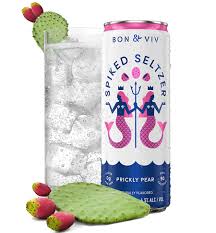 On Super Bowl Sunday Anheuser-Busch will be airing an industry first… a spot dedicated to its newest product line, the recently rebranded BON & VIV Spiked Seltzer, a 4.5% ABV flavored malt beverage with natural fruit and botanical flavors, zero grams of sugar and  only 90 calories.

According to Adweek this commercial marks the company’s “largest effort to date to expand beyond the traditional beer roster” and Anheuser-Busch’s actions only serve to confirm Nielsen findings that women are changing the beer landscape with buzzy alternatives on game day.