Hey, no one’s perfect…as we at American Craft Beer understand better than most. That said, there are some brewing ideas out there that are insanely misguided. So welcome to another BAD IDEAS IN BREWING…and we’re blaming a famed New Zealand brewery and the Chinese for this atrocity!

What is it with craft breweries that think it’s a good idea to brew beer with animal parts? Have they just entirely run out of ideas or is there something deeper and darker at play?

The world is still reeling from the New Zealand stout brewed with stag semen…And now that country is at it again with a “beer and deer” offering. Deer ‘velvet’ grows on the animals’ new antlers for a few months before they harden and calcify to form bone and it’s widely used as health aid in Chinese medicine.

According to Voxy  Moa Red Stag Wheat was developed exclusively for export to China, an important and growing market for Moa.

And with the epicenter of the ‘deer velvet’ market being China, Moa’s wheat ale was brewed specifically to showcase the nubile deer fiber sourced from the South Island of New Zealand’s famous deer farms.

Not surprisingly the idea for Red Stag Wheat came about over SEVERAL beers in China, when Moa’s very own Gareth Hughes and Parley Reynolds were playing with unique beer ideas for the Chinese market.

And not only did that drunken dream become a reality… It became a reality that sold out in China is less than 48 hours! 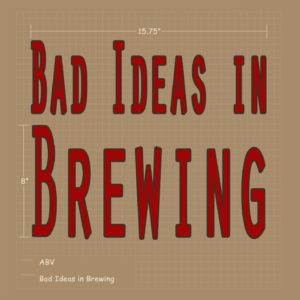 Hey, we like deer as much as anybody. But the fact that the Chinese consider deer velvet to be some kind of health elixir doesn’t mean it belongs in a beer…Even if it delivers a “velvety” mouthfeel…Just sayin’.

Whether the Chinese are ‘dying’ for it or not, Deer Beer is a conceptual nightmare …It’s a truly BAD IDEA IN BREWING and an acclaimed brewery like MOA needs put this thing out of its misery immediately, if only to redeem their award-winning name.

And besides, the Chinese have already proven that they’ll consume almost anything…so maybe an IPA brewed with toe bacteria?