Munich’s Oktoberfest, the world’s largest beer festival, opened its 16 day run over the weekend and things got predictably crazy.

Tens of thousands beer-lovers were reported to have stormed the gates on Saturday. And due to overcrowding many of the massive beer tents were forced to close their doors to visitors almost immediately.

As many as 6 million visitors from all around the world are expected to ‘raise a glass” at Oktoberfest 2019 before it ends on October 6. And even though 7.5 million liters of beer was consumed at Oktoberfest 2018, the beer isn’t cheap…one liter of beer can cost up to €11.80 ($13).

Oktoberfest in Munich: Then and Now

More than 200 years ago Europe took a breather from the Napoleonic wars, to commemorate a wedding which laid the foundation for Munich’s Oktoberfest, now a fall harvest tradition that has spread across the world.

In 1810 King Maximilian Joseph of Bavaria invited his subjects to celebrate the marriage of his son, Ludwig, to Therese of Saxe-Hildburghausen. Held in a pasture outside of Munich, which became known as Theresienwiese (‘Therese’s Meadow’) in honor of the new Crown Princess, the first gathering was a welcome respite for the war-torn nation. Today that same land (15 acres now surrounded by a bustling German metropolis) is home to Munich’s annual Oktoberfest celebration although its scope and scale has changed considerably.

In addition to the 17 beer tents, all hosted by Munich breweries which provide their own take on the traditional seasonal offering, the world’s biggest beer festival now comes with countless food opportunities, music, museums, a petting zoo and amusement park rides.

Another thing that changed in 1904 was Oktoberfest’s timing…

The first Oktoberfest was actually held in October. And although it’s still known as Oktoberfest, Munich’s celebration now opens each year in September and closes on the first Sunday in October.

The reason for that change-up is Bavaria’s historically bad weather. It’s been known to snow in Munich in October and that would be a problem for a festival which is now a huge tradition that is estimated to generate more than €1.2 billion for the German economy. 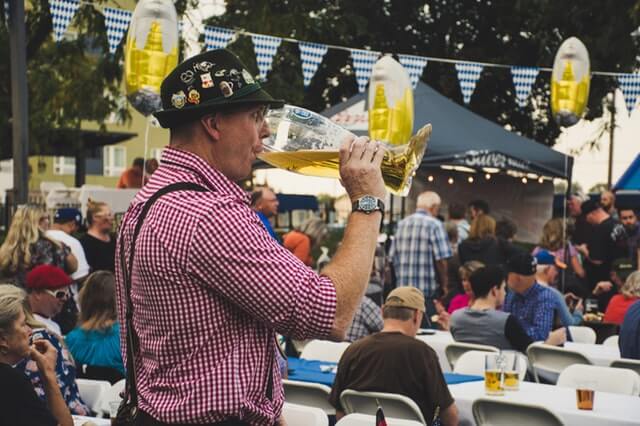 Amazingly enough, Munich’s official Oktoberfest beer is currently not a Märzen, the lager that is most commonly associated with the season and Oktoberfest celebrations in the US.

For over 100 years, the Märzen style (a full-bodied malt-rich lager) ruled Munich’s Oktoberfest. But In 1990, festival organizers realized that modern tastes were changing and that festival-goers were asking for something lighter.

So In deference to this growing consumer preference, the official beer style of the festival has morphed from what might be considered a true Märzen to more of a Pale Lager. Currently there are six breweries allowed to serve beer at Munich’s Oktoberfest. They’re all relatively big names in Germany and none of them are youngsters.