For the sake of clarity and with an eye toward avoiding any bias, we’re doing this thing alphabetically. We’ve managed to reach the 27th state on our list, The Cornhusker State, Nebraska. The state’s nickname is synonymous with the mascot of the University of Nebraska, a moniker coined by Charles S. “Cy” Sherman, a sportswriter for the Nebraska State Journal in Lincoln.

Nebraska ranks 37th in total population (roughly 1.9 million), is ranked 43rd in population density and houses 33 craft breweries as of2015 (an increase of 15 since 2011) who are represented by the Nebraska Craft Brewers Guild. The state ranks 34th in total breweries (including D.C.) and 16th in breweries per capita as of 2015, according to the Brewers Association. 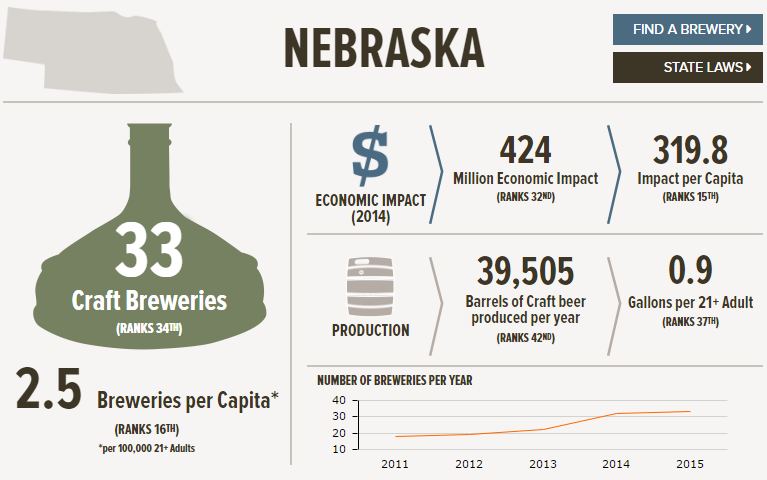 Lying in the thick of America’s Great Plains, Nebraska was primarily inhabited by the native Omaha, Missouria, Ponca, Pawnee, Lakota and Otoe tribes until the mid-1800’s. It’s largest city today, Omaha, situated on the Missouri River, was in navigated through by Lewis and Clark in 1804.

The city of Omaha itself wouldn’t officially become a city until July 4, 1854, the same year the Kansas-Nebraska Act passed creating the territories – with Omaha becoming Nebraska’s territorial capital. Within 5 years, the state’s first brewery, Krug, opened to the public. Quickly others sprang up including McCumbre (later becoming Metz Brothers Brewing), Storz Brewing (originally Saratoga then Columbia) and Willow Springs Distilling, commonly referred to as the “Big 4.” Storz was ultimately the largest and longest to stay in business independently, at one point producing 150,000 barrels a year around 1935. After a few sales in the late 60’s the brewery shuttered in 1972 and was since  restarted in 2013 by Thomas and John Markel. Willow Spring Distillery was, until the Great Depression, the third largest distiller in the nation, yet quickly folded after quality issues in the early 30’s. Metz brewing had the shortest lifespan, closing and then sold during prohibition to an agriculture company in 1920, though the label continued to be brewed in Colorado until 1961.

Krug Brewing hit at a peak of at least 25,000 barrels in the 1880’s and was successful enough to have opened their own amusement park and beer garden in 1904, yet was later shut down in 1930 when 4 people wer e killed on a roller coaster. In 1936, Falstaff Brewing bought the brewer and continued to brew in Omaha until the plant closed in 1987.

Empyrean Brewing, originally opened in Lincoln as Lazlo’s Brewery and Grill in 1990, was the state’s first brewpub and it’s first craft brewer. They were also the first craft brewer to bottle in 1999, the first to distribute statewide in 2002 and are the largest producer in the state today. The first brewer to bring home a medal at GABF was Jones Street Brewing in 1993 and the state, as a whole, has garnered 10 more medals since, including 2 in 2015.

6 More Nebraska Breweries We Like and You Should Check Out

Boiler Brewing (Lincoln) – The newest brewer on our list, it was opened in 2015 by award-winning homebrewer Tim Thomssen and are already making a huge impression with the diversity of their brews. Check out their popular Blueberry Berliner Weisse, their excellent series of NE IPA’s known as THAT!, the smoked Poblano pepper Oktoberfest or any of their various chocolate stouts. A must stop destination in Lincoln. Kinkaider Brewing (Broken Bow) – The other newer enterprise on this list, Kinkaid opened in 2014 in the Sandhill Region, shaped by the Kinkaid act of 1904. They’re set up on a farm, putting out some delicious suds bedecked with some of the coolest label art around, like their Dan the Wiser Kolsch, Devil’s Gap Jalapeño Ale and Hiram’s Bones Porter.  You should definitely check out their brewery for 12 fresh, can’t-go-wrong taps.

Nebraska Brewing (Papillon) – One the easiest on this list to find outside of the state, NBC has been making award-winning beers since 2007. Not only have they been awarded 4 GABF medals, but they also possess 8 of the top 10 beers by rating on Beer Advocate, including their Melange A Trois, Chardonnay barrel-aged Belgian Strong, Black Betty Imperial Stout and EOS Hefeweizen. Believe me, it’s worth the short drive from Omaha.

Scratchtown Brewing (Ord) – Another brewer found in the Sandhills, Scratchtown opened in 2013 as the first in
the region. Another of the state’s stop rated brewers, Scratchtown is known for their luscious Black Eye Imperial Porter, Wonder Twins Double IPA and the Sinister Grin Strong Belgian Pale. With many lakes and rivers in the area, they’re the perfect spot to stop via the great outdoors.

Upstream Brewing (Omaha) – Open since 1996, Upstream is Omaha’s oldest brewpub, sporting two locations – one in the Old Market district and the other in West Omaha. Another NE brewer that’s collected 4 GABF medals, Upstream has a great selection of everyday easier drinkers, but also a great assortment of seasonal offerings like their Grand Cru, Oud Fashioned with Raspberry, or their Rum Barrel aged Coconut Porter. I’m getting thirsty just writing about them!

Zipline Brewing (Lincoln) – With their name coming from its founders “innate sense of adventure and their desire to connect the thrill seeking spirit in all craft beer fans,” Zipline opened its doors in 2012. They’re known for their great take on German styles such as their GABF gold winning Copper Alt, but also their tasty Saisons and excellent variety of IPA’s. We’ve been big fans of Zipline for years – excellent beer from some of the friendliest people in the industry.

Check out Omaha.com for a map of all of Nebraska’s great breweries