What the hell is a Saison?

We’ve all been there, when the waiter comes around and you want to order the “Say-zohn.” “Oh… the Sigh-zon?” says the waiter. “Uh… Yes, the… Zey-zun,” you reply and point to the menu in an attempt to end the horrible, impromptu Monty Python sketch you just wandered into. Truth is, we don’t think anyone really knows how to pronounce this one except the Belgians, and we have it on good authority that they’re just making it up as they go along.

But no worries…We’ve got your back on this. Stick with us and you’ll be an instant expert! 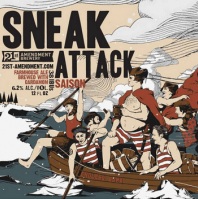 Saisons hail from the Wallonia region in Belgium, which covers the southern part of the country and borders northern France. As Phil Markowski explains in his book, “Farmhouse Ales,” they were brewed as winter ended and were made to be stored until they could be served to farmhands in the summer. To survive until then, they were higher in alcohol, making them less prone to spoilage. At the same time, they were made to be light in body, easy to drink, and not so incredibly strong that the farmhands ended up getting wasted in the fields. Early Saisons varied widely from farmhouse to farmhouse – but unfortunately, few records remain of these historical versions.

Today, Saisons are usually light in color, light in body, sometimes spiced – and sometimes just present the illusion of spices because of the characteristics imparted by their yeast strains. Saison yeast tends to perform better at higher than normal temperatures, which is one reason it’s believed that they were originally wine strains that evolved to work well for brewing. The Saison style can be fluid and can vary some from brewer to brewer, which makes it a great fit with what’s happening with American craft beer. Stateside brewers have been playing around with Saison style/American IPA hybrids (like Stone Brewing’s Cali-Belgique) and we think you’ll be seeing more of this kind of experimentation going forward. Just don’t let the Saison’s ambiguous pronunciation prevent you from trying them out. If anyone tries to correct your elocution the next time you order a Saison, just look them in the eye and tell them: “Thanks pilgrim, but I’ve heard it both ways.”