In case you missed the last 41 states, we’re doing this thing alphabetically and after 2 years, we’ve made it to #42 on the list, The Volunteer State, Tennessee. It’s disputed as to which war earned the state it’s nickname, whether it be their noted valor in the War of 1812 during the Battle of Orleans, or if it was the Mexican-American war when 30,000 Vols signed on. Also known as the Big Bend State, the name Tennessee is claimed to be derived from a “Cherokee modification of an earlier Yuchi word” translated as “meeting place”, “winding river”, or “river of the great bend.”

Tennessee ranks 16th in total population (roughly 6.6 million residents) and ranks 20th in population density and houses 66 craft breweries as of 2016 (an increase of 42 since 2011) who are represented by the Tennessee Craft Brewers Guild. The state ranks 24th in total breweries (including D.C.) and 39th in breweries per capita as of 2016, according to the Brewers Association. 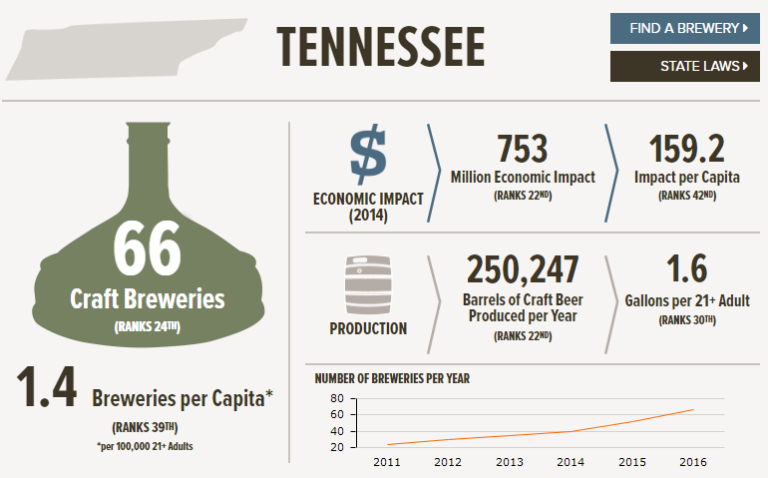 Like many states, Tennessee began it’s brewing history with the arrival of German immigrants. Once Nashville was designated the state capital in 1843, the population boomed as did the state’s brewing industry. This isn’t to say that locals weren’t already concocting their own brews or cooking on stills (this is Whiskey country, after all), but there is little evidence of any commercial brewing in the state prior to 1850. The most successful and longest lasting brewery in the state is the Nashville Brewery, open intermittently from 1859 to 1890. Founded by Jacob Stifel as a small brewery at the corner of South High and Mulberry, he kept it open until the Civil War impeded his operations in 1863. While he continued on following the war while bringing on a partner, the brewery continued to struggle amid increased competition, being sold at auction in 1876 and changing hands five times in 7 years, it ultimately became the William Gerst Brewing Co from 1893 to 1954. At the end of 2016, the Nashville Brewery name was revived, along with a number of traditional German styles now available.

While there were a number of larger brewers in the state, the other major player operated alternately as Memphis Brewing Co starting in 1866 (founded by G.H. Herbers), then becoming Tennessee Brewing in 1885, lasting also until 1954. In 1903, the brewery produced 250,000 barrels, making it the largest brewery in the South. The brewery  today still stands as a beautifully remodeled condominium. Both of these breweries were ultimately forced out by the larger, nationally distributed brewers, leaving the state brewery-less from 1954 until 1988. Besides the obvious affinity for Whiskey and Bourbon, brewers also had to contend with the remnants of Prohibition, which saw the establishment of dry/wet county and city laws. Today the state still has a complex web of dry and wet designations with 10 counties, including the home of Jack Daniels, still designated as dry. So if you’re visiting, get the low-down on whether the town you’re staying in is dry.

The oldest craft brewer in the state is Blackstone Restaurant and Brewery, open since 1994 in Nashville and earning 12 GABF medals since then – only non-native Gordon Biersch has won more. In total, the state’s brewers have garnered 58 medals since 1989, starting with the now defunct Bohannon Brewing.

6 Tennessee Breweries We Like and You Should Check Out

Bearded Iris Brewing (Nashville – Germantown) – The newest brewery on this list, they are located in the historic Germantown neighborhood that once housed the first breweries in the state. Only open since 2015, they’ve created over 38 styles and are already becoming a powerhouse behind the strength of their hazy Pale Ales and IPAs. Bearded Iris is the most exciting new brewery in the state and are certainly not to be missed. Blackberry Farm Brewery (Walland) – Only in operation since the summer of 2013, this fine purveyor of various Belgian styles including Saisons and sours resides on a “pastoral 4,200 acre estate in the Great Smoky Mountains.” Most impressive is that in this short time, they’re already distributing bottles (and now cans) in 33 states, have won 2 GABF medals and have concocted over 45 recipes. If you’ve got the cheddar to stay at the resort, do it; otherwise, you might just see them in fine bottle shops.

Jackalope Brewing (Nashville – Gulch) – Founded by friends Bailey Spaulding and Robyn Virball, they’ve been up and running since May 2011. The name of the brewery comes primarily from Bailey’s fascination in the mythical creature – much in line with their motto “Believe in Yourself, Believe in Great Beer.” They’ve become known for their Bearwalker Brown with maple syrup and Thunder Ann Pale Ale made with apricot and mango, both great examples of the unique 30 plus styles they’ve brought to life since inception. (Nashville – Pie Town) – Creating their “Finely Tuned Craft Beer” since 2013, the founding of Tennessee Brew Works was an evolution from a kitchen hobby with friends into an efficient 25 barrel brewhouse. Known for their Cutaway IPA, Basil Ryeman Farmhouse Ale and Walk the Lime wheat with lime zest, they also feature a series of tap-only Tennessee Farmhouse beers. With ten taps on hand at their taproom – half of which are seasonals, everyone will find something to their liking here.

Wiseacre Brewing (Memphis) – Founded in 2013 by a pair of craft passionate brothers, Wiseacre has come up to speed faster than most any of the new wave of brewers in the state. They’ve already created over 67 distinct beers over 4 years, including their popular Ananda IPA, Gotta Get Up To Get Down Milk Stout and GABF medal winning Tiny Bomb Czech Pilsner. Any visit to Memphis must include a trip to their taproom in the Birmingham neighborhood. Yazoo Brewing (Nashville – Gulch) – Having opened up shop in 2003, Yazoo is the largest producer of beer in the state and one of the most established brewers in the region. Started by Founder and Brewmaster Linus Hall, the brewery has already outgrown it’s original digs, moving into a 40 barrel brewhouse in 2010. Proud brewers of the “Embrace the Funk” series, as well as 4 GABF medal winners, but they’ve also started brewing the classic Gerst Amber Ale from so many years ago.

Check out more breweries in the state via brewtrail.com