In case you missed the last 32 states, we’re doing this thing alphabetically. And we’ve now managed to stumble our way to the 33rd state on our list, The Old North State, North Carolina. Also known as the Tar Heel State, a moniker coined by General Robert E. Lee who once referred to the state’s soldier’s in the Civil War as “Tar Heel boys,” with tar, pitch and turpentine being chief products of the state in it’s early history. As early as 1585, settlers in Roanoke were brewing their own beer, as it was for many colonists on the East Coast – a safer alternative than untreated waters. In those early years, most beer was brewed in the home, often by housewives, but local suds, as well as imports from England, New York and Philadelphia were available.

The first example of commercial brewing came in the form of Single Brother’s Brewery and Distillery, which sprang up in the Moravian colony of Salem. According to the minutes of the colony, in 1773 “the wish was expressed that we should plan for the building of a brewery in town, and that less strong drink should be distilled; for beer would be much more wholesome for our Brethren, and the neighbors would buy it in quantity.” The brewery was up and running one year later.

While Whiskey flourished in t 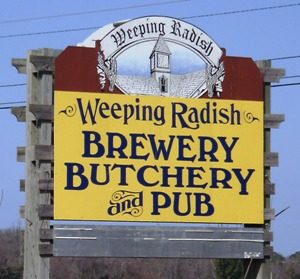 he early 1800’s beer sagged until the Germans showed up in the 1840’s, as they’re prone to do in most every state’s history. With the success of Lagers coming in from larger cities in the Mid-West and Northern metropolitan areas, the popular English-style ales brewed in the state struggled and with the onset of the Civil War, brewing was outlawed to limit grain consumption.

As is the case with most Southern States, the prominence of Prohibition often overshadows the efforts of those who continued to brew outside the law. By 1881, 68 towns in the state had become “dry” and eventually North Carolina became the first state in the South to enact Prohibition in 1908. Repealing Prohibition 2 years after the nation did in 1933, they created an alcohol control board in 1935 and the General Assembly passed an alcoholic beverage control bill 2 years later, restricting alcohol to 6%.

While this cap remained in place until 2005 (raised to 15%), Stroh and Miller breweries opened up shop in the 70’s and the first micro-brewery, the Weeping Radish, was opened in 1986 by Uli Bennewitz. The native Bavarian already had brewing equipment on it’s way from his motherland when he realized that not only were brewpubs illegal, but that the town he wanted to set it up in, Manteo, resides in a dry county. Without the aid of a lobbyist, he managed to get a brewpub law passed and it was an easy argument, as there had already been passage of a law allowing for wineries to have alcohol on premise in 1984.

Ever since, the craft beer explosion in North Carolina has been no joke. And while at least three large craft brewers have set-up east coast operations here (New Belgium, Oskar Blues and Sierra Nevada), the largest native brewer in the state is Highland Brewing in Asheville. The state has won 67 GABF medals since 1987, including a record 17 alone in 2016, including a big win for Brown Truck Brewing as Very Small Brewing Company and Brewer of the Year.

Burial Beer (Asheville) – Up and running since June of 2013, this 10 barrel brewhouse has created over 200 different styles and is one of the top rated brewers in the state. Specializing in Saisons, IPAs and various Belgian

styles, Burial is a in the midst of their second expansion into a second, 20 barrel location in South Asheville.

Foothills Brewing (Winston-Salem) – Releasing their beloved Sexual Chocolate RIS tomorrow, Foothills has been in operation since 2004 and become the epicenter of brewing in the Winston-Salem area, with 2 locations. Known for their focus on well-honed German styles and great IPAs, this 8 time GABF medal winner deserves all the success it’s earned.

Fullsteam Brewery (Durham) – Founded in 2010 by Sean Wilson, this industrial looking brewery is focused on delivering “Plow-to-Pint” beers crafted with locally harvest ingredients. Known for their experimental takes on classic styles as well as their easy drinking flagships, Fullsteam has a little bit of something for everybody and no matter your choice, you can’t go wrong. (Charlotte) – Featuring arguably the best rated beer in the state today, a NE Style Hazy IPA called Citraquench’l, Heist is moving up in the NC craft scene since opening in 2012. With over 100 styles created in that time, this “Belgian centric brewpub” also features craft cocktails and a unique food menu featuring everything under the sun.

Mother Earth Brewing (Kinston) – Opening their doors in 2008, this 2-time GABF medal winner is best known for their top-rated Silent Night Imperial Stout. They’re a brewery that’s in love with sourcing all their ingredients locally, in the founders small hometown in the Tobacco Belt. With highly rated styles from their Endless River Kölsch to their Munich Dunkel, you’ll naturally love what’s brewing in Kinston. Olde Hickory Brewery (Hickory) – Beginning their history in 1994 with a 7 barrel, converted dairy system, they’ve now grown into a 25 barrel brewhouse with multiple locations in Hickory. Sporting one of the top rated beers in the state, their Event Horizon Imperial Stout has a special release every fall/winter. One of the most established brewers in the state, this 3 time GABF medal winner is not to be missed.

Raleigh Brewing (Raleigh) – “Tapping the Capital” since 2010, Raleigh’s colorful presence in the town has always drawn a crowd. Winning their first GABF medal in 2015, the location is known for not only The Miller’s Toll Imperial Stout and House of Clay Rye IPA, but also their gorgeous murals in their taproom and their home brewer supply store. (Asheville) – Since opening their doors in 2012, Luke and Walt Dickinson have set the national craft beer scene afire. Known for their focus on barrel-aged sours, open-fermented wild ales and hoppy west-coast IPAs, they’ve created over 300 styles in less than 5 years. Their 100% brett fermented wild ale Serenity is one of their 4 GABF medal wins and we only expect more in the future.

Big thanks to Karl Campbell, in print at NCPedia.org, for his wonderful history.